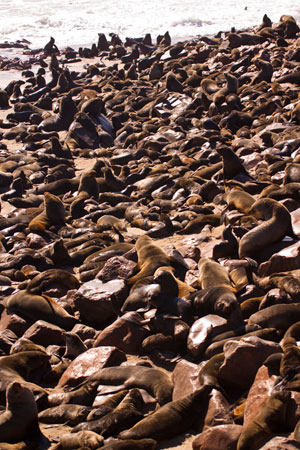 After arriving in Walvis Bay the previous day where we were spending our first few nights in virtual luxury at Flamingo Cottages (compared to the camping we were looking forward to for the remainder of the trip), we headed north towards Cape Cross via Dune 7 where Sophie and Chris did some quad biking. I went for a walk in the desert with our guide Lionel but apart from some jackal tracks we didnt see much - not even a single insect. According to Lionel Walvis Bay used t be famous for fishing and prostitutes. The whole place stank of fish and it was difficult to know which was which.
On the way to Cape Cross there are salt mines and along the roadside small stall tables were set out for passersby to purchase salt crystals. There were nobody minding these stalls by the way, only a tin with a hole in to put your money. There werent a soul around for miles, that we could see, so either theyre very lazy sales people or somebody might spring from inside one of the rusting oil drums littering the side of the road at any moment should you happen to stop and peruse the goods. They never did though.

The Cape Cross Seal Colony was awesome! Never seen so many animals in one place. Looking out to sea, there appeared to be a lot of seaweed floating around, but on closer inspection it wasnt seaweed at all  it was thousands of seals swimming, fishing and generally hanging out in the surf just having a good time. What a life!

The seals sounded like a large herd of sheep  bleeting away. All the pups had been born around Christmas time but were still dependent on their mothers.

All of a sudden there was a rush of things happening; a stampede towards the sea and absolute mayhem and a cacophony of noise. What was all this about? Couldnt be us tourists as surely theyd be used to us by now and nobody were doing anything strange, well not to my untrained tourist watching eyes anyway.
Then it all became blinkingly obvious! A black backed jackal was sauntering in to the colony, not a care in the world and not even trying to be inconspicuous. He obviously wasnt too hungry at the time as he decided to have a nap in the middle of the colony in the shade of a rock, surrounded by delicious seal pup dinner opportunities.