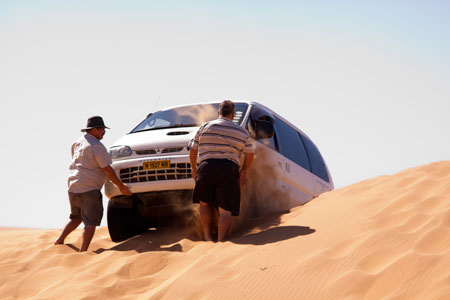 Spectacularly beached on the crest of the dune, giving Johannes and Francois a thorough sand shower.

Another early wake-up for the Smith family. Actually were quite used to that and it is going to be essential later in the trip when we head into the bush as just after sunrise is the best time to catch the animals.

Sophie had taken the light bulb out of her light in her loft room last night, so when Chris tried to turn the light on and off to wake her up this morning, nothing happened. Nice one, Sophie!

Our vehicle (Toyota HiLux) is not working right, the 4x4 has gone which will be a problem when we head out into the bush and especially in Khaudum as nothing less than a 4x4 will survive! Luckily we noticed it early on  actually on our second day when we stopped on the beach by a shipwreck to take some pics on the way to Cape Cross. Almost got stuck on the beach. The hairy armed woman at the Budget office had us take it to a garage to have it looked and she phoned yesterday afternoon to say that theyd managed to get us another vehicle. At least we wont be going into the desert in a 2x4! (Not advisable).

We met up with Johannes and Francois from in a car park in Swakopmund and we were three vehicles in a row, heading into the desert. This proved to be a good plan as we found out later on in the day. The first thing our guide Francois found for us was a side winder adder, eating a small gecko. How cool is that!

The guides looked really funny scampering among the dunes pulling stuff out of the sand. They were both quite stocky guys and youd expect them to pull out really large and dangerous stuff like a lion or something  not minute, delicate little geckos smaller than your little finger.

The white lady dancing spider was also pretty cool, doing cartwheels down the dune to get away from danger, i.e. us . But the coolest animal of the desert has to be the Namaqua Chameleon Happily sitting in his tiny bush eating bugs as they walked past, snaring them with his lightning fast, sticky tongue and crunching them down whole with legs sticking out of the corners of his mouth, his eyes going in opposite directions making sure we were not up to any mischief.

Francois found a lizard but to catch it he had to make it angry enough for it to bite his finger, after a lot of running around. Very funny to watch! One of the dunes we stopped at was almost dark purple in colour. Francois put sand all over Sophies arm and held a strong magnet underneath it, causing the sand to stand up like thick fur on her arm. The sand was full or iron oxide.

This is the point when it came in very hand y to be more than one vehicle, we were tearing along in the desert, over the dunes, feeling like we could tip over at any time, slipping and sliding in the sand. We were told to buckle up as we were going over a large dune at some considerable speed, to get across. We waited patiently and watched as the first vehicle go full pelt up the dune and over the top. Then it was our turn, what a rush! It was absolutely terrifying hurtling along, the engine screaming as we went up the dune and literally jumped over the edge to the other side, not able to see what was coming of where we were landing. On the other side we got out of the way slightly in order to make way for the third vehicle as it would be coming over the top shortly. We got out and watched to see it come out of nowhere. All of a sudden there it was rearing over the top of the dune on its back wheels, spectacularly beaching itself on the crest of the dune. The other two guides/drivers clambered up to try to push it back over the edge again, but only succeeded in getting a thorough sand shower by the front wheels spinning helplessly as the heavy vehicle was seriously stuck, almost freewheeling on all four wheels. Pushing clearly didnt work, so there was only one thing for it  pulling. We all climbed up on the crest of the dune (well out of the way, I must add) to get a good view of the situation. The first vehicle, sans passengers, went back over the top and attached a rope to the rear of the beached van and pulled it back down the way it had come.

After a nice lunch at the Lighthouse Pub on the Swakop seafront we headed back to Walvis Bay in the sandstorm which had brewed up over lunch. Not a real sandstorm, but too windy for us to have our planned sundowners on the top of Dune 7.

Back at the cottage we did a tent pitch practice so that we all knew how to pitch the tents tomorrow for our first night of camping as it was likely that we would arrive in the dark. Sophie was amazed. The tents, unzipped, and unfolded from the roof of the vehicle and a ladder came down. Perfect for lion country...