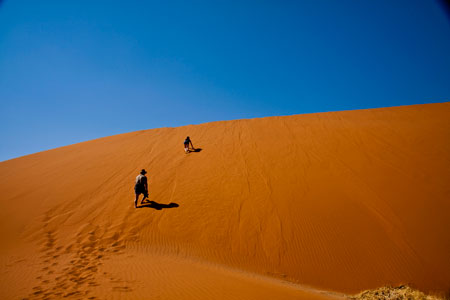 Up early this morning to pack down all our stuff and get it into the vehicle ready for heading out into the bush. Yippeeee!

Our first camp site was the Agama River Camp between Solitaire and Sossusvlei, a fantastic little camp with friendly owners and great pitches and basic facilities. We even dared having a go in their swimming pool, which at this time (winter) was bloody freezing!

Before we got there though we drove through the stunning Kuiseb Pass and Canyon and Gaub Pass where we stopped for a snack before crossing the Tropic of Capricorn. When we got to Solitaire we stopped for fuel and had some absolutely wonderful apple cake from the rather eccentric baker who walked around in his socks. As the name suggests, Solitaire is tiny place in the middle of absolutely nowhere and this guy had been there for 20 years. It showed.

That night we watched the full moon rise over the Namib from the roof deck of the house at the Agama River Camp. Absolutely Magical.

Well, the first night in our rooftop tents was an interesting experience, Sophie thought she had visitors, which was probably a combination of the wind and branches of the overhanging tree. Every time we turned over, the whole vehicle bounced on its suspension, so it wasnt the easiest place to sleep.

Dune at Sossusvlei
Got up at 0600 and had the camp and vehicle packed and on the road by 0745 which I didnt think was bad for our first day of camping. The journey from Agama Campsite to the Sossusvlei gates took roughly 45 minutes. The dunes were absolutely stunning and we saw some game on the way such as raptors, gemsbok, ostrich and lots of springbok. Decided to climb a dune down by Deadvlei which nearly killed me. Very steep and for every two steps upwards you slid one step back down in the sand. In the end it was just one thing to do  keep going upwards and not stopping with shoes off. The view from the top of the dune was worth the effort and the well earned rest on the ridge. We walked back down along the ridge of the dune, burning our feet in the hot sand on the sunny side, crossing over to the shade side to cool down every now and then.

Next stop Sesriem Canyon (once we found the right road), it was a little bit misleading and the directions we were given werent particularly accurate.

John at the Agama Campsite told us that Sossusvlei gates open at 0530 in the morning so we were getting up at 0345 the following morning to be try to be there for sunrise on our second day. We got there at 0510 and we were the 4th car in line and it was still pitch black. 0530 came and went and the gate did not open and found out that the external gate didnt actually open until 0630. It was only the people who were staying inside the park itself who were allowed to get in earlier, so we got the gas burner out and made cup f tea while we were waiting with the others. Hopefully the light would still be good by the time they let us in.

Got a couple of good shots of Dune 45 and also of the sun rising over the desert with the landscape the colour of pink, orange and purple in the hazy rising sun.


We left Sossusvlei by mid morning to head north via Windhoek where we were going to change vehicle to get one with a working fridge as this was now also a slight issue. We drove to Windhoek via Gamsberg Pass, stopping first at Sossusvlei for lunch and had some more apple cake from the baker who actually wore something resembling shoes today. Not sure when he last washed his pinafore though...