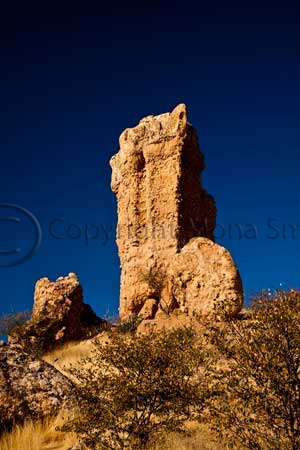 Packed down camp in 15 minutes, really getting this down to a pat now, and headed out towards Outjo and Vingerklip. Not much to see along this road apart from miles and miles of scrub farmland. Vast open areas and pretty beautiful with the hills in the background.

We were quite excited about staying at Vingerklip Lodge for 3 nights of luxury after camping for the best part of a week. The terraces around Vingerklip were stunning as was the rock itself  a very unusual geological feature. The whole place looks a bit like the badlands of Americas Wild West and we were half expecting John Wayne to draw up on his horse any minute.

Vingerklip Lodge was full when we got there. We had been hoping that theyd had a cancellation or that not all of the tour operators block bookings had been used, but no such luck. Walter the manager was very helpful  he didnt get us into another lodge, but we could camp nearby at Bambatsi , a guest farm run by a German couple. We sighted a white tailed shrike and a monterio hornbill on the 12 minute drive to the farm which we took as a good sign.

Gerard and Inga were very welcoming and offered us coffee and cake on their balcony overlooking their farm and waterhole from the top of the hill  beautiful, and another good sign. Although not a lodge, which we had been hoping for as a change, the welcome and atmosphere more than made up for the slight disappointment. We got a fire going and put our dinner in the pot before heading back up to the farm for a G&T. G&T and half!! Gerard poured some serious measures and not only that, he operated what he called an honesty bar just help yourselves and tell me later what youve had. What a refreshing change in terms of hospitality, theres not many places in the world where you get that these days. 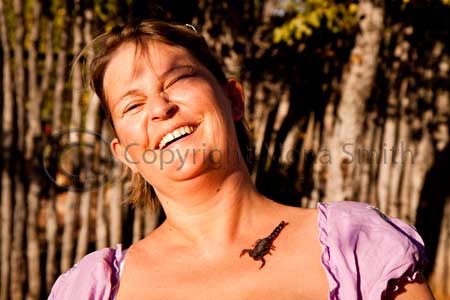 Lionel let no stone remain unturned in the camp looking for creepy crawlies, and eventually found a scorpion which he decided would make a great picture .

The next morning we headed for Twyvelfontein but took a loop around Vingerklip first which was stunning in the early morning light. On the road to Twyvelfontein we stopped at the petrified forest which was just by the road, so not a long detour this time (which the Vingerklip loop turned out to be). The petrified forest was a lot more interesting that we had expected. Saw some wonderful Welwitchia plants, or trees as they really are, the worlds oldest plant at several 1000 years old. The ones we saw ranged from 150 years old with only two tiny leaves and around 600 for the larger ones, which still werent very large I must say.

We stopped at Aba Huab camp for lunch where we were contemplating staying the following night. He had our lunch down by the riverside, but didnt see any sign of the famous desert elephants. We asked at reception and she told us that two had come through a couple of days earlier. When we asked her where the best place to see the desert elephants were, she replied: Etosha. Very helpful, not! 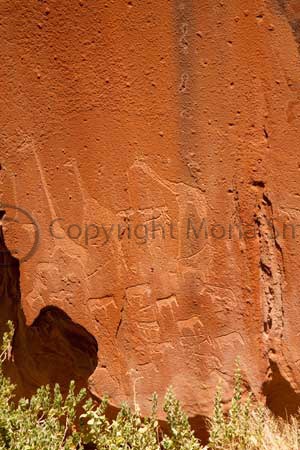 We took a guided tour around the Twyvelfontein rock carvings, some of which were absolutely amazing. Everywhere you looked, any flat surfaced rock, had some engraving on it. We split away from the tour guide after a while and went up to see the dancing kudu by ourselves, stopping at the spring fontein for a lovely drink of cold water and a face and hair soak to cool down a bit as the temperature in the sun, reflecting off the rocks were a bit on the high side.

We decided that there wasnt much else to see in this part of Damaraland so we will head out to Etosha in the morning and try to get a night in a lodge just outside the National Park instead, giving us the whole of the next day in the park. On the way to Etosha the following morning, we stopped at Outjo to stock up on food supplies for two nights camping. Supermarket was OK, but no good butcheries in town, well none that we found anyway. When we got close to Etosha we started phoning a few listed in the brochure we had picked up in Walvis Bay. We finally got lucky at Eagle Tented Lodge and Spa Beautiful tents with stunning en-suite facilities and proper beds and thick duvets. Oh, the luxury!!

Sophie and I had an aromatherapy massage in a room with no windows out onto the bush, listening to the birds outside. What a life! A great treat after so many nights camping. Saw quite a lot of different game on our afternoon game drive. The black rhino however proved illusive.