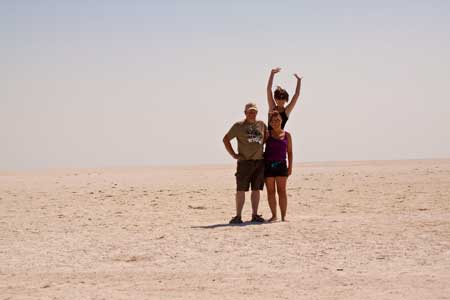 Making the most of the empty space at Etosha Lookout.

After a great nights sleep in a proper bed at Eagle Tented Lodge and Spa, were getting ready to spend the rest of our trip in our roof top tents. Etosha will be our home for the next couple of days and our first few days of wildlife and really looking forward to it.

We entered Etosha National Park at Okaukejo gate and having paid our entrance and camping fees etc we were right there by the Okaukejo waterhole, literally just by the entrance gate, teeming with zebra, gemsbok, springbok, wildebeest, kudu, impala and more birds than I care to remember. Ive also got a funny feeling that Ill be fed up with springbok by the time we exit the park in a few days.

Whilst in Etosha we stayed in Halali campsite which is situated roughly in the middle of the national park, so easy access to all areas and a good place to base ourselves from. It also has its own waterhole. Halali campsite is quite large and holds a lot of people, which was quite new to us on this trip as up until now wed been in much more private areas.

Walked down to the waterhole that evening, after our braai and I could absolutely kick myself as I didnt bring my camera and there was a lone rhino down there. Why did I not bring my camera? I go nowhere without it!! Hopefully, hell be back tomorrow night. Anyway, it was great to just sit there and enjoy the moment.

There are a great number of waterholes in Etosha where great gameviewing can be had. At Reitfontein we saw a variety of game and also a lot birds and decided that this was a place to come back to later. At Salvadore we came across two lionesses with three cubs and a large male enjoying the shade under a tree away from the others in peace and quiet. At Etosha Lookout, on the edge of the pan, I took pictures of absolutely nothing! Felt like we had to change that view, so we used the opportunity for a family portrait.

At Springfontein we spotted a pride of lions lounging about so we sat down to wait for some action. Wildlife watching really requires a lot of patience and a lot of luck. We sat there for hours that afternoon, but the lions were not very cooperative. They did absolutely diddley for hours, so in the end we had to head back to camp before the gates shut. On the way there we came across a couple of hyena. I absolutely love their bad boys of the bush characters, loping around scrapping for a fight. Its not just the large animals that are great to watch either. At Springfontein there were at lot of different game, but it was a crow that gave us the most entertainment. He was the funniest thing, standing on his little rock complaining to all that went by in the manner of an old army general having a bad day.

The following morning we came across a beautiful herd of elephants which we watched for ages. As we were leaving, a huge great bull came towards us on the track and we pulled over to let him get past. Had to sit absolutely still and make no noise whatsoever, as we didnt want to upset this guy. He passed so close I could almost reach out and touch him, well, his knee was about the height of the window of the car. Probably the largest bull Ive ever seen.