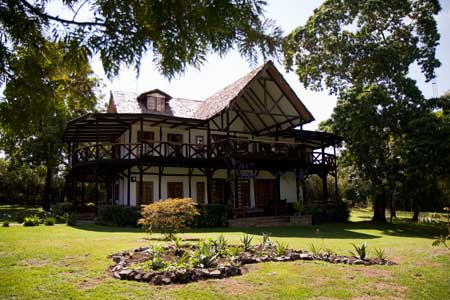 Stunningly beautiful Twiga Lodge with Mt Meru in the back garden

Well, the French tried their best to spoil it for us by taking the air traffic controllers out on strike, delaying our take off from Heathrow for an hour. This could be a problem as we only have a one hour stopover at Nairobi for our connecting flight to Kilimanjaro, Tanzania. Oh well, hopefully there will be more flights later in the afternoon, unless we make up some of the time in the air.

A few rows behind us on the plane, a right royal racket kicked off. ... leave me alone, your ***** braking my arm.... Im not going anywhere... ******* you cant *******do this *****. Two great bulldog shaped blokes were holding this African guy down, trying to keep him in his seat. Apparently an illegal immigrant had won a free flight home which I dont think he had ordered, and certainly was not pleased about his prize. In the end he was causing such a disturbance that they had to take him off the flight, so he got his wish in the end for today of not going anywhere  except back to a holding cell.

As we were coming in to land at Nairobi they announced the gates of all the connecting flights, except ours! Our flight was not showing on the board in the arrivals bit either so we legged it towards the transfer desk where luckily I spotted another board which had our flight on it at gate 5, so off we ran again and spotted Lionel who was joining us on our trip from South Africa.

At Kilimanjaro Airport, Paul Sweet from Shaw Safaris was waiting for us in the arrivals hall with a big welcoming smile. And you couldnt make this next bit up! On the drive from the airport, Lionel thought that Paul looked familiar and they started talking about where they were from and where theyd been etc and figured out that they had worked (read partied) together in Hoedspruit, South Africa in the early 90s. Later at Twiga Lodge Paul took out some of his old photos from Hoedspruit and would you believe it, there was one of Lionel! Incredible!

Erika and Paul Sweet are the most lovely people. They moved to Tanzania some 18 months ago when they bought Twiga Lodge [link] and set up their self drive safari business, Shaw Safaris Shaw Safaris . Having hired a car and camping equipment once themselves they immediately sat that this could be done much better. Well, I can definitely say that theyve thought of everything. What a difference to the equipment we had in Namibia last year....we could probably give the landy a full service in the bush if we felt like it. All the camping equipment, food kit etc was well thought out and I dont think we could possibly need anything else.

After a nice lunch on the balcony we went for a walk in the woods, through the banana plantation and up the slopes towards Mount Meru which can be seen from Twiga Lodges back garden, rising majestically over the trees in into the clouds. Spotted some Sykes/Blue Monkeys however the Colobus proved elusive. On the way back down we stopped briefly where some kids were watching a local football game on a sloping field under a jacaranda tree in bloom. The day finished with Gin and Tonic on the veranda followed by a lovely dinner, wine and great company.

On the road to Tarangire

Had some fantastic rain in the night. The vehicle is now all packed and ready and were off to Arusha stock up at the supermarket and go to the Tanapa office to pay for our camping, entrance fees, vehicle fees etc for entering the National Parks. Arusha is a chaotic, lively and colourful town. Changed over some USD for TZS but the bureau de change didnt have enough cash so Im not sure how much I changed in the end but I hope it will be enough for a few days as we wont be able to get to another bureau for a few days. It was a wad about 3 inches thick! All the entrance fees, vehicle fees and camp fees for the National Parks have to be paid for by card as they dont take cash any longer to stop corruption. Good idea, so we got cash cards from the bank which were topped up with the money we needed for the fees. Off we went to the Tanapa office to get our camping vouchers and had prepared ourselves for a few hours to get that sorted. Apparently theyre not the quickest. We had hoped to pay our camp fees at the Tanapa office so that we didnt have to do that on the trip however they had a power cut so we were unable to pay. We did get the vouchers however and were out of there after only about 20 minutes, which must be a record. So, vouchers in hand and off we go.

At the entrance to the Tarangire National Park we had our first problem. The camp fees for 3 days was $450 however wed already paid $550 as a deposit when booking the sites a few months ago. According to the people at the gate the Tanapa office should have given us a receipt for the deposit and they would not accept the email and bank transfer confirmation I had with me. They phoned the Tanapa office who by all accounts did not what to do with the situation, however the manager at the gate decided not to charge us the camp fees, which meant that after all Tanapa would owe us $100. Dont think Ill see that money again somehow.

On the way to camp through the park we spotted the most photographed Kirks dikdik in the park and a bat eared fox  he was too quick so didnt get a photo unfortunately and a bit further on a male lion chomping on something in a bush. Set up camp at Mibuyu Mingi Special Camp Site under a stunning baobab tree and watched the sunset whilst sipping a G&T by the camp fire. Im in heaven...