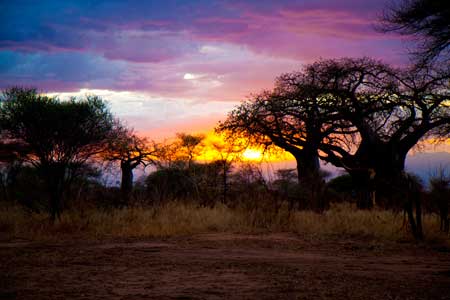 Thought we were under attack from killer bees when I woke up this morning, but it was only a load on insects feeding in the baobab flowers above us. Staying at Mibuyu Mingi Special Campsite in Tarangire National Park Mibuyu Mingi incidentally means "large Baobab" which was very fitting as the center of the camping area was a beautiful example of a large Baobab with many, many others in surrounding area. In fact, Tarangire is full of these beautiful trees. After a quick brew we headed out down towards the Tarangire river for some action. Saw loads of jumbos, zebra and more wildebeest than you can shake a stick at. Drove all the way down to the swamp where the picnic area was lovely with a gorgeous view across the swamp which had recently had a bush fire by all accounts. Lovely banana cake, by the way Erika. That went down a treat.

The way back to camp was interesting with non-existent waterholes and road that were not on the map and roads on the map that were non-existing hm... Stopped off at Poacher's Baobab which David Read talks about in his book Beating About The Bush when he talks about a trip to the Tarangire area in the late 40's before it was a national park "After inspecting our new campsite in the daylight, we decided to move on to where theh present-day lodge is, from where we did a lot of walking in all directions and while we were here we saw some nineteeen Rhino in an area of less than one hundred acres. It was the largest number of Rhino in an area of less than one hundred acres. It was teh larges number of Rhino that I, or any of us, had ever seen in one group, scattered all over teh area, and for some time after, while flying over that same place, I would see many similar groups of Rhino. It was here that we found a large baobab tree, from which we saw smoke coming out of the top and found eight poachers living inside and something like sixty tusks and Rhino horns and a huge amount of meat and dried skins, all in this one tree. The poachers were arrested and handed over to the Game Department, together with all their trophies and after that, the Game Department took a real interest in the area." I don't believe there are any Rhino left in Tarangire today.

As Im writing this (in my bush diary) Im feeling rather wobbly after a pretty strong G&T  I can see a large shadow in front of me on the other side of the camp fire. Its a lone bull elephant coming to check us out on the way down to the lake just before sunset.

Heard male lions calling in the night and way, way off a hyena and looking at the spoor around camp we were visited by elephant, zebra and hyena. For some stupid reason I cant get the IR camera trap to work, so really annoyed about that (found out when we got home that the connectors for the battery had flipped down and only needed adjusting back up  how irritating). Heading out on the northern part of the camp this morning and hoping to see some more cats after lioness we saw close to the Tarangire River yesterday afternoon. Went all the way to the top of the park and didnt see anything overly exciting apart from the usual zebra and wildebeest and some other junk animals. At the Matete picnic area it was already busy when we arrive around 2pm and didnt get time to get our stuff out of the vehicle before a bus load of school children turned up. Really pleased to see that the local children also get the opportunity to see these places and learn about the precious wildlife which we are so privileged to experience.

The local troop of baboon saw this as an opportunity and started harassing the tourists for food. We had to kick one under the table which was getting quite aggressive whilst another took it quite nonchalantly and peed on the picnic table next to us. Took the long, scenic route back to camp with several dead ends, nonexistent roads and not a sign of predators anywhere, not a single paw print in the dirt.